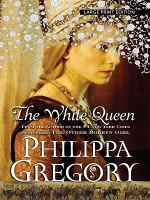 The first in a series about the Lancasters and the Yorks during the Wars of the Roses.

Great way to start learning about the Wars of the Roses while still enjoying an interesting work of fiction. I would often stop reading to look up more information on some historical fact that came up in the book, so the process of reading "The White Queen" was very educational for me.

I might be done with Philippa Gregory. I was quite a fan of The Other Boleyn Girl because I loved how overwrought and dramatic it was, but except for that she hasn't impressed me much. She could use some drama in the last two I've read. Very pedantic writing - this happened, then this, next this - and not much emotion or variety in her writing. This story suffered also by losing all vibrancy and color once Edward died. I won't be reading the sequel.

Book 2 of the series

I have read other Gregory novels and enjoyed them all. I know only a very little about the York and Lancaster era so can't comment on the facts presented. If my confusion and frequent consulting of the genealogy tree are any indication, she wasn't as clear as she had hoped. It was an interesting story of Elizabeth Woodville and her time as Edward IV's queen, and, for me, a starting point to read other accounts of the times. To be fair, no doubt there aren't a lot of contemporary materials still existing to help any author when explaining the whys of things. The prose flows quickly and towards the end, I felt a little breathless with the fast-paced introduction of people and plots going on. Still I would say this was worth the three days it took to read.

Once upon a time there was a handsome prince. He was tall, blonde, brave, strong, a good friend and a forgiving opponent. The most common word used to describe him, both by his friends and his enemies was "charming". He defeated the wicked Queen, even her supporters thought she was wicked, to become King. As King he dedicated himself to justice, prosperity, and low taxes. Then one day as he rode along he saw a poor widow standing by the side of the road waiting to beg the King's help. She was the most beautiful fascinating woman he had ever met, and as a handsome prince he had, of course, met many beautiful women, including the daughters of neighbouring kings who hoped he would marry them. Of course a King must never marry for passion or love, but put his duty to the welfare of the kingdom above everything else. But the handsome and charming prince fell instantly in love and married the poor widow. And they lived, mostly, happily ever after until the day he died in her arms.

Wonderful historical novel and first of three, The Red Queen and The King Makers Daughter. Adds flesh to the War of the Roses (War of the Cousins probably more correctly as pointed out by the author). Enjoyable read regardless if you read for history or simple enjoyment.

As good as I thought and knew it would be. Elizabeth was a very captivating women and her story was very riveting. I finished this book in three days or less. I found it nearly impossible to put down. I am very excited to start reading The White Princess next, I know I know out of order a little bit but I am not a fan of Anne Neville and want to read The Kingmaker's daughter last in the series.

I found this book well below the author's usual standards. Since I know the period so well (I wrote a Master's thesis on the 15th century), I just found myself irritated by the magic and foofaraw that went on. It was "made for TV" sensationalist rubbish.

I thought this was good for beach reading - I wasn't too familiar with this bit of history so the book was engaging, but all the strategizing and second guessing toward the end was tedious. I am 50/50 on reading another one.

"...though men go to war it is women who suffer--perhaps more than anyone."-excerpt from The White Queen

"...it is easier to take a country to war than to bring it at peace, and a country at war is a bitter place to live, a risky place to have daughters, and a dangerous place to hope for a son."-excerpt from The White Queen

" When the enemy is before you, cast an eye behind you to see what your true and loyal friends are doing at the rear."-Elizabeth Woodville, The White Queen

"It's a fool who is afraid of nothing. And a brave man is one who knows fear and rides out and faces it."-Elizabeth Woodville, The White Queen

Elizabeth Woodville, a young Lancastrian widow known for her outstanding beauty, catches the eye of the newly crowned Plantagenet king, Edward IV. After their secret wedding, Elizabeth must fight for respect and power in a court that doesn't trust her. She is especially hated by the Earl of Warwick, Edward's chief advisor. When Warwick goes to war against the king in favor of Edward's brother George, Edward flees the country while Elizabeth and her children hide in sanctuary. Edward is victorious, but the court intrigue and rebellions continue, even though Elizabeth's position is fairly secure until Edward unexpectedly falls ill and dies. His youngest brother Richard seizes control of the throne through Elizabeth's young sons, until they mysteriously disappear and Richard claims the throne for himself. Elizabeth must use all the wisdom, influence, and perhaps even some witchcraft she's acquired through the years if she is to protect her family's legacy and regain the throne for her children.

The White Queen was the first book Philippa Gregory wrote about the primary female characters during the War of the Roses. She is not releasing the books in chronological order of the story line (she didn't do it with the Tudor novels, either). However, with the Tudor novels, they are great when read in the order she wrote. I expect this series will be the same.

The White Queen follows Elizabeth Woodville from just before she meets Edward to until after he dies. It introduces you to all the major players in the war in a way that makes it easy to follow. The whole series is a bit heavy on first person self-talk, but she is a nice character to follow.

alannahor thinks this title is suitable for 15 years and over