Saved Searches Advanced Search
Our Roxborough location will be closed for updates February 14-21, and will reopen at 9AM, Saturday, February 22.
Print 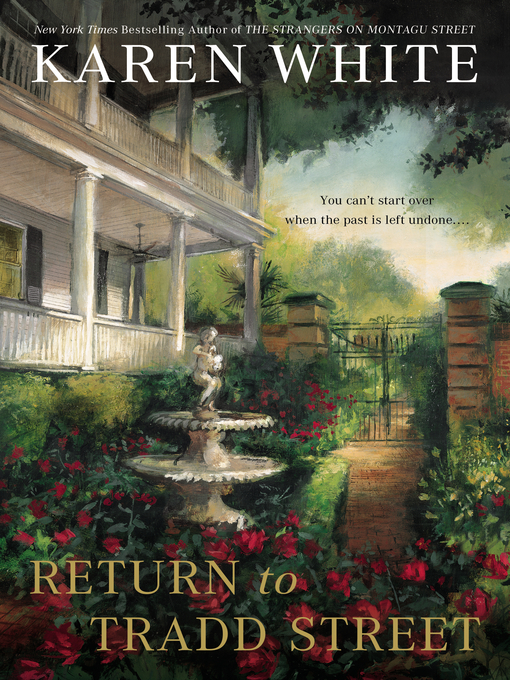 "Melanie is only going through the motions of living since refusing Jack's marriage proposal. She misses him desperately, but her broken heart is the least of her problems. Despite an insistence that she can raise their child alone, Melanie is completely unprepared for motherhood, and she struggles to complete renovations on her house on Tradd Street before the baby arrives. When Melanie is roused one night by the sound of a ghostly infant crying, she chooses to ignore it. She simply does not have the energy to deal with one more crisis. That is, until the remains of a newborn buried in an old christening gown are found hidden in the foundation of her house. As the hauntings on Tradd Street slowly become more violent, Melanie decides to find out what caused the baby's untimely death, uncovering the love, loss, and betrayal that color the house's history--and threaten her claim of ownership. But can she seek Jack's help without risking her heart? For in revealing the secrets of the past, Melanie also awakens the malevolent presence that has tried to keep the truth hidden for decades ..."-- Provided by publisher.
Publisher: New York, New York : New American Library, 2014
ISBN: 9781101626481
1101626488
9780451240590
0451240596

So a lot is going on in this fourth story of the Tradd Street series. Picking up from the previous installment, Melanie Middleton, Realtor and Psychic, is pregnant with frequent verbal sparring partner and flame Jack Trenholm's babies (it's twins, because whenever have Melanie and Jack done anything by halves?). She turned down his marriage proposal at the end of the last book, and is now facing life as a single mother. Couple that with financial woes, the discovery of an infant skeleton in the foundation of her home, and the rise of new ghosts and the return of old ones, and Melanie has her hands full.

My favorite aspect of this installment, by far, was the ghost story and mystery. Karen White is brilliant at crafting them, and I greatly enjoyed learning more about the Vanderhorsts, the family that owned 55 Tradd Street before it was bequeathed to Melanie by the (purportedly) last member of the family, Nevin Vanderhorst. Of course, it does kind of stretch the suspension of disbelief that we have now 2 generations of drama and murder in that family. In the first book, Nevin Vanderhorst said that it was the women of his family that were the strong ones who held everything together. Well, they did that, along with dying to defend the family or getting murdered by their rivals. Gods, I know families can be complicated, but this is right out of a soap opera! That being said, it was still as entertaining as all get out.

Another aspect I liked about the mystery was that the new characters, Irene and George Gilbert, were actually genuinely nice people, and not the stereotypical, greedy interlopers out to tear Melanie's now-beloved house out from under her. They were firm in their conviction that they were in the right with regard to their claim on the Vanderhorst estate, but still good, kind people. I particularly loved how, at the end, they were willing to take a fair offer from Melanie and her family for the houses, and were in no way bamboozled by that scumbag, Marc Longo, when he tried to muscle in on the sale of 55 Tradd Street.

I also liked the introduction of Detective Thomas Riley as a new friend (and potential love interest, though thankfully that doesn't go too far) for Melanie. I love his take on her psychic abilities, and how Melanie could use them to help solve cold cases and help people. Melanie's mother has also expressed similar thoughts about how their abilities are meant to help restless spirits resolve their issues and cross over into the light, so it's a nice way of building on that. I hope we see more of him in the future as well.

Okay, so that aside, I still had some problems with the story, and they mostly center on Melanie and Jack. I've seen a lot of characters who are very bad at communicating with each other - it's practically a staple in any fictional story - but these two really take the cake. Frankly, I'm a little shocked that the supporting characters like Nola, Sophie, and Ginny didn't wring both their necks for their complete and utter inability to actually talk about their feelings. I also damn near laughed my head off when Nola was so incredulous when she learned near the end of the book that Jack had never told Melanie that he loved her, and this being after they had married and the twins had been born. Not to mention, there were numerous opportunities for Melanie come out and tell Jack exactly why she didn't accept his marriage proposal - that she was under the impression that he only did so because she was pregnant - and yet she chokes it back until she no longer can, namely when she's in the screaming pain of labor.

So, again, White really hits the nail on the head in the ghost mystery aspect of Return to Tradd Street, but the romantic subplot and how it influences the characters' behavior is getting a little stale. It isn't enough to put me off on reading the rest of the series, but it is starting to grate on me a little bit.

This is my 5th Karen White. The Sound of Glass is by far my favorite.

The Tradd Street series is uneven. I liked The House on Tradd Street enough to continue with the series, but almost gave up with The Strangers on Montagu Street.

I'm glad that I opted to read Return to Tradd Street because the tedious romantic tension between Melanie and Jack was finally resolved with their wedding after the birth of their twins. Nola continues to delight. The author totally wore out the who is the baby in the foundation plot line and brought it to a confusing, disappointing end. I regret that I didn't keep a Camille/Charlotte score card.

All about talking with the dead
And contacting the dead.

There are no ages for this title yet.

There are no summaries for this title yet.