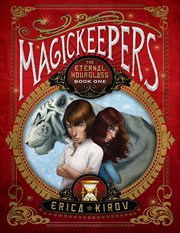 Nick Rostov's life is borderline embarrassing. His dad is well known as the worst magician in Las Vegas. Nick hasn't had a real friend in years. And his report card is not good at all. One F. Two Cs. One B-minus. And an A. In Health. But on Nick's thirteenth birthday his life changes forever. Awaking on the top floor of the world famous Winter Palace Hotel and Casino, he meets, for the first time, his extended family. A family gifted with the power of magic, real magic, exiled from their native Russia, they now hide in plain sight among the neon lights of the Casino. All members of the family are powerful magicians, but Nick is unique. Nick has the sight-the ability to see into the past. His gift is the only way to unravel the mystery of the Eternal Hourglass, a magic artifact so strong it can even stop time. But the family's enemies will stop at nothing to get it. Nick knows that he is in for the adventure of a lifetime... if he survives. The one and only Harry Houdini was killed for it, the most powerful magicians have battled for centuries to retrieve it, and even the Ancient Pharoahs feared its power. What would you do for an hourglass that stopped time?
Publisher: [United States] : Sourcebooks Inc : Made available through hoopla, 2010
ISBN: 9781402253966
1402253966

For those who can't get enough Harry Potter, now there is Nick , the magician. Nick has grown up unaware of his heritage as the latest in a long line of Gazers and is suddenly snatched away to the luxurious lair of his true family when he reaches the age of 13. Instantly, there is a whole new world of experience before him.

blue_swan_77 thinks this title is suitable for 10 years and over

Meet Nick Rostov…one day he’s the son of the worst magician in Vegas and the next he’s descended from a long line of Russian Royalty on his dead mother’s side of the family. Oh yeah, he also learns that Damien, the best magician in all of Vegas is really his third cousin and not just some über-talented illusionist but a real magician; think Harry Potter minus the wands and pointy hats…and so is he.
Nick learns the hard way that the family’s enemies, led by the crazed Rasputin, will stop at nothing to gain access to his powers so they can find the eternal hourglass…a device so powerful it can stop time.

If you were Nick what would you do? When you’re a magician in Vegas what else can you do but join the show? Hopefully he’ll live long enough to meet everyone’s expectations.

This is a great start to a promising series.