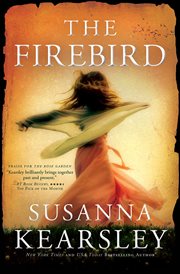 New York Times Bestseller Two Women. One Mysterious Relic. Separated By Centuries. Nicola Marter was born with a gift so rare and dangerous, she kept it buried deep. When she encounters a desperate woman trying to sell a small wooden carving called "The Firebird," claiming it belonged to Russia's Empress Catherine, it's a problem. There's no proof. But Nicola's held the object. She knows the woman is telling the truth. Beloved by readers as varied and adventurous as her novels, you will never forget spending time in New York Times and USA Today bestselling author Susanna Kearsley's world.
Publisher: [United States] : Sourcebooks Inc : Made available through hoopla, 2013
ISBN: 9781402276644
1402276648

Review excerpt: "There are two parallel stories in 'The Firebird', a narrative device that readers of other of Kearsley’s books may find familiar. This book is actually a sequel to one of Kearsley’s earlier novels, 'The Winter Sea'. It’s also, as far as I understand, loosely connected with her novel 'The Shadowy Horses', where Rob McMorran first appeared. Anna Logan is actually Anna Moray, daughter of Sophia and John from 'The Winter Sea'. Her life is an eventful one, and throughout, she seeks love, belonging and to be reunited with her true family. That’s not to say that she doesn’t experience a lot of love and care in both of her foster families. The Logans and the Gordons care for her deeply, and while she may not have had the life her parents wished for her, it’s by no means a bad one."

A great read that managed to swing mystery, history and romance into the story.

She is such a gifted author. I've read The Winter Sea, The Rose Garden, and just finished Firebird. I loved the Outlander series. However, I've enjoyed these more.....

I never read historical fiction and rarely romance, but I read this one because Susanna is coming to speak at Guildford Library on October 27th. Well, it was a great book! It has an interesting plot about a British art dealer with the power to touch an object and know its history. Nicola travels to Russia to help a client prove her wooden firebird is connected to Russia’s Empress Catherine. Ah, and there is romance, with Rob, who has more developed psychic powers than Nicola herself. This book had a pace that moves along quickly, with interesting settings and realistic, likeable characters. I will try other books by this author now. (submitted by KA)

I can see why many would compare it to Outlander, and in a sense, you're not wrong, but no time travel in this one. I really enjoyed the plot and the psychometry was very interesting. I liked the parallel lives, so it was a good read for me.

This isn't my favorite of Susanna Kearsley's works, but that by no means makes it bad. It is still a beautifully told love story that blends historical and contemporary threads in a really readable and entertaining way. In comparison to her other books, especially The Winter Sea, The Shadowy Horses and Mariana, it is not as strong. If you have read the Winter Sea and the Shadowy Horses I do recommend it because this one explores the lives of two people who who are tangentially involved in those books. We get to find out about their lives after the events that we read about and also get tidbits about the main characters from those books.

I picked this book up because it was offered as a suggested “read-alike” to Diana Gabaldon’s Outlander. Like Outlander, The Firebird blurs the lines between romance, historical fiction, and fantasy. Firebird, however, could have been half of its 500+ pages and been a more satisfying read.

Absolutely spellbinding - could not put it down from start to finish and now working on Winter Sea. Excellent book.

Two Women. One Mysterious Relic. Separated By Centuries. Nicola Marter was born with a gift so rare and dangerous, she kept it buried deep. When she encounters a desperate woman trying to sell a small wooden carving called "The Firebird," claiming it belonged to Russia's Empress Catherine, it's a problem. There's no proof. But Nicola's held the object. She knows the woman is telling the truth. Expertly weaves two tales into one vastly entertaining read.

Sloppy romance, posing as fantasy/paranormal. A total waste of time.

" ’Tis by their words that men betray themselves, and often by the smallest of their actions, which ye’ll rarely see unless ye hold your tongue and use your eyes instead. Ye’ll learn more of a man if ye look at his face when he’s looking at somebody else, than ye’ll learn any other way, but ye have to keep silent to do it."-Captain Jamieson(advising a young Anna)

“See now, nothing that we do in life is easy. Your pawn will capture mine in his next move, and yet that move will leave ye open to attack then from my bishop three moves hence. Each choice we make has an effect for good or ill, for all we may not yet perceive it at the time.”-Colonel Graeme(teaches young Anna more than a game of chess)

“So you would not let him bear that shame, yet you yourself would shoulder it? You need not always stand and take a whipping you do not deserve.”-Anna(speaking to Edmund)

“I’m not good with fragile things. I’m careless, and I break them, and I lose them, but I…I’d take care of you.”-Edmund(speaking to Anna)

the city had survived, as it had always done: endured the changes of its name and government, stood fast through war and siege and revolution, and through all of that had managed still to shelter and encourage art and dance and life and beauty.
It was what my mother always told my brother and myself that she missed most of all about St. Petersburg – the beauty that lay everywhere, in unexpected places, if you only had the eyes to see it.

“Never let him fool you into thinking that he’s calm, it’s all an act. . . . it isnae in his nature to sit still, he’s only taught himself the trick of it.”

It surprised me that I hadn’t noticed him earlier. I usually didn’t miss noticing good-looking men. And on top of it all, he’d been reading a book, and a man doing that didn’t often escape my attention.

Men, so Anna had observed, replied to threats in one of two ways, much like bears. They either dropped and turned and scuttled off, or else they stood their ground and bellowed back and tried to make themselves look larger.

If we cannae be what we were born to be, the whole of it, we die a little on the inside, every day we live the lie.

"You should never give your hand to any man unless he also holds your heart."

Nicola Marter has the gift of psychometry-the ability to touch an object and discover information about its previous owners. Her grandfather's adamant instructions to never reveal her abilities, coupled with the negative reactions from those who do not understand her, has Nicola eager to keep her talent a secret. Margaret Ross appears at Nicola's artifacts and art gallery with a small carving of a bird, called the Firebird, and claims the item was given to her ancestor, Anna, by Peter the Great's wife, the Empress Catherine of Russia. Once Nicola holds the Firebird, she sees a vision of Anna with the Empress and realizes the carving could bring Margaret, who is in dire need of money, a fortune. Determined to help Margaret and prove the authenticity of the Firebird, Nicola enlists the help of Rob, who also has the same psychic abilities as Nicola's, only stronger. Following Anna's path, Nicole and Rob find themselves crossing Scotland, Belgium, and Russia, taking the reader on a journey spanning the Jacobite Rising of 1715 and its aftermath.

Are you looking for an excuse to curl up somewhere with a mug of hot chocolate and do nothing for a few hours? Of course you are! It’s awful weather. Plus, snuggling in with a good book beats getting bodychecked by someone else who desperately needs Santa to bring a Tickle-Me-Cabbage-Bratz-Kid or whatever. Hey, your friendly librarian is here to help.

At least, I’m here to help if a long, charming ramble through Scotland and Russia with a smoldering Scotsman sounds appealing. If not, you can probably get off this boat here.

By day, Nicola Marter works in an arts museum in London, England. By night, however, Nicola struggles with a rare gift that lets her divine the provenance of the rare items she curates simply by touching them. Her grandfather had been viciously prosecuted in Russia for his gifts, so Nicola faces strong family pressure to suppress her second sight and live a more normal life.

However, a chance encounter with a destitute woman forces Nicola to reconsider her gifts and their role in her life. Before Nicola really thinks about it, she goes to Scotland in search of Rob, whose own keen gifts could help her find the proof she needs that this woman’s family holds a rare artefact, given to them by Empress Catherine of Russia. Rob, naturally, would be our smoldering Scotsman – one with whom Nicola had an intense connection in university, and with whom she has unfinished business.

The two depart on a whirlwind tour of the Scottish coast and St Petersburg, hot on the trail of the firebird artefact. As with any Susanna Kearsley novel, there’s plenty of steamy tension rendered so carefully that you can share this book with your mother without blushing. I’ve recommended other Kearsley books in this space as readalikes for fans of Diana Gabaldon’s *Outlander* series - the sexual tension, historical research, and time travel elements make Kearsley’s books a perfect match for any Sassenachs looking for a great next read. *The Firebird* is no exception. This book is highly recommended as a shopping procrastination tool, or as an excuse to get out of anything else you’d like to avoid this holiday season.

There are no ages for this title yet.