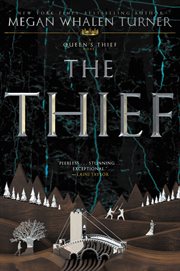 Discover the world of the Queen's Thief. New York Times-bestselling author Megan Whalen Turner's entrancing and award-winning Queen's Thief novels bring to life the world of the epics and feature one of the most charismatic and incorrigible characters of fiction, Eugenides the thief. Megan Whalen Turner's Queen's Thief novels are rich with political machinations and intrigue, battles lost and won, dangerous journeys, divine intervention, power, passion, revenge, and deception. Perfect for fans of Leigh Bardugo, Marie Lu, Patrick Rothfuss, and George R. R. Martin. Eugenides, the queen's thief, can steal anything-or so he says. When his boasting lands him in prison and the king's magus invites him on a quest to steal a legendary object, he's in no position to refuse. The magus thinks he has the right tool for the job, but Gen has plans of his own. The Queen's Thief novels have been praised by writers, critics, reviewers, and fans, and have been honored with glowing reviews, "best of" citations, and numerous awards, including the Los Angeles Times Book Prize, a Newbery Honor, the Andre Norton Award shortlist, and the Mythopoeic Fantasy Award. Discover and rediscover the stand-alone companions, The Queen of Attolia, The King of Attolia, and A Conspiracy of Kings, all epic novels set in the world of the Queen's Thief. This edition of The Thief includes an exclusive piece by Megan Whalen Turner about her inspiration for the setting of the story, an introduction to the characters from the world of the Queen's Thief, and a map of the world of the Queen's Thief.
Publisher: [United States] : Harper Collins Publishers, 2009
ISBN: 9780061968525
0061968528

Read what happens when a thief gets one chance at freedom and the lengths he'll take to make sure he comes out on top. Discuss on March 10th, 2021.

The best part of this story was the interaction between the characters. The main character and thief, Gen, is mischievous, smug, and ever so amusing. Travel with Gen and his companions on a journey filled with risks, challenges, gods and goddesses….with a final twist by the story’s end.

List - The Longest Walk in the World: Traveling Fantasy and Sci-Fi

The decidedly Greek flavor of this fantasy (and the delightfully snarky protagonist) ensures that this meander toward the necessary MacGuffin keeps a smart pace.

Eugenides, the thief who can steal anything, is in prison for stealing the King of Sounis’s seal. However, the magus of Sounis has discovered the location of Hamiathes’s gift, a stone that gives its owner eternal life. The magus, a loyal adviser of the king who knows every fact, is an old man, and he requires the help of a master thief to steal the stone from its temple. Gen is offered a chance at freedom if he successfully steals Hamiathes’s Gift for the king and brings it back. He quickly leaves on the journey with the magus, the magus’s two apprentices Ambiades and Sophos, and the soldier Pol. They endure many hardships together on their near-impossible quest, and many plot twists keep readers guessing at what will happen next.
My favorite aspect of the book is how the relationships between characters grow and change. At first, Gen is seen by all as an annoying necessity for the success of the mission, and he annoys everyone. However, as time goes on, they learn to respect each other and grow closer. However, his relationship with Ambiades moves in the opposite direction. Ambiades feels that being the grandson of a duke, he is better than scum such as Gen. The addition of this relationship keeps the plot interesting as the next big fight is always waiting to happen. I also liked how Turner advanced the plot, adding suspense until the very end. Whenever it seems that the mission will be successful, a new problem arises. One surprising aspect of this book is the lack of romance. Books targeted towards the teen audience typically have this element. I feel that more background about the personal lives of those traveling with Gen would have strengthened the story and made it more appealing to a wider audience. I would recommend it to every teen who appreciates a well-written novel.

Age Recommendation 10-14
Gen is in prison. He is one of the few people that the king hates, so Gen is in a prison with maximum security. That means extra chains, guards, and no outside time. Gen is sitting in his cell thinking about how he could escape when 2 guards come in and drags him out. When Gen adjusts to the brightness he sees the king’s magus. The magus wants Gen to steal something. Gen asks what it is , but the magus refuses to tell. The magus says if Gen steals this for the magus then he would make sure that Gen wouldn’t go back to prison. Gen quickly agreed and asked when they would begin the journey. The magus says soon. The next day Gen is dragged out of his cell again to meet three other people. They were Pol, Ambiades, and Sophos. The magus says that they were all going on the journey. Will Gen be able to steal the item? Are Gen’s loyalties even in the right place? Read the whole book to find out.

Definitely not what I was expecting but absolutely an amazing book! I didn't realize I liked adventure books so much and this one was so funny and had a plot twist that I was absolutley not expecting! I really need to read the next book and I'm very excited to do so!

I recommend this one to everyone who asks (and some who don’t!). Funny, subtle, and surprising! Check out the rest of the series as well.

Excellent...."burned the midnight oil" reading it and being unable to put it down.

Fair warning: expect this book to steal your interest in reading anything but the rest of the Queen's Thief series.

In a word The Thief by Megan Whalen Turner is smart. Intended for a teen audience, it dives right into hard topics with a narrator who is smarter than he seems and more cunning than the reader realizes. An impressive feat as it is an easy read without the use of unusual words and references to outside material. The most impressive feature of this novel is the world. Megan Whalen Turner build a rich world with intricate political rivalries and religious background that every second you read it feels real to you. While some of her characters lack depth, the main characters are equally as rich and enticing to read. She also includes some interesting plot twists that keep you hanging off every chapter. The Thief by Megan Whalen Turner is the beginning of a trilogy but ends off on a good note that could be read alone. A great book for those who are looking for a fun little adventure.

Clever, exciting, funny, with several plot twists that will keep you turning pages almost too fast to also absorb the excellent characterization. First book in a series of uniformly terrific stories.

In Turner’s fictional medieval world, the focus is on three neighboring rival countries, bound together by the necessities of trade, but which are always on the verge of war. Eddis is a mountainous country which controls the pass that allows trade between Attolia and Sounis. Gen, short for “Eugenides,” is a professional thief. In this first book, he is hired by a wizard and a soldier from Sounis to help them find a sacred relic which may hold the key to power in this medieval-like world. They don’t know that Gen is from Eddis and has his own agenda to protect his country. The book is classified as a children's novel but the series becomes more teen and adult-like with succeeding volumes. It's impossible to put down, and you will want to quickly jump on to #2, *The Queen of Attolia.*

As a page who works in this library system and sees so much content coming in all of the time, I can say that this is one of the most different YA books I have ever read (in the best way possible). Megan Whelan Turner is incredibly witty, suspenseful, and creative, and I am pleased to say that these characteristics hold true throughout the rest of the series as well (a very hard thing to maintain). This is definitely a must-read, and I hope you find it as enjoyable as I did.

ebook and audio CD for 12 years and up

samvar thinks this title is suitable for 11 years and over

keylime0 thinks this title is suitable for 12 years and over

rosebud2112 thinks this title is suitable for 12 years and over

Stormtrooper55 thinks this title is suitable for 11 years and over

_Abi_ thinks this title is suitable for 9 years and over

TheGreatMinimum thinks this title is suitable for 10 years and over

jknode thinks this title is suitable for 8 years and over

Nilufar thinks this title is suitable for 15 years and under

If you want to keep something safe, I say hire a guard, at least until someone invents a better lock. Or hide your treasure where no one will find it. - pg 136

"Gods damn, gods damn," I was howling as the guards led me, completely blind, down the stairs. I still had my hands over my eyes, and they held me firmly by the elbows. my feet hardly touched the stone steps.

The magus was a good bit stronger than I was. Holding me by the cloth at the back of my neck, he shook me once or twice and my head swam. I heard the cheap cloth tear. He grabbed for a firmer grip on my neck.

Every time he laughed, I spat insults at him. It was not politic, but as always, I couldn't keep an insult in when it wanted to come out.

Guns weren't as accurate as crossbows, but they were less awkward to transport, and to have one would have been a comfort.

His eyes narrowed, and the hair on the back of my neck started to rise. I've seen envy before, and I know the damage it can do.

Saying things I shouldn't has been the origin of most of the painful episodes in my past, and it would certainly be an improvement in my character if I had a little more control over my own tongue.

I am a master of foolhardy plans, I thought. I have so much practice I consider them professional risks.

The king's scholar, the magus, believes he knows the site of an ancient treasure. To attain it for his king, he needs a skillful thief, and he selects Gen from the king's prison. The magus is interested only in the thief's abilities.

What Gen is interested in is anyone's guess. Their journey toward the treasure is both dangerous and difficult, lightened only imperceptibly by the tales they tell of the old gods and goddesses.

The most powerful advisor to the King of Sounis is the magus. He's not a wizard, he's a scholar, an aging solider, not a thief. When he needs something stolen, he pulls a young thief from the King's prison to do the job for him.

Gen is a thief and proud of it. When his bragging lands him behind bars he has one chance to win his freedom-- journey to a neighboring kingdom with the magus, find a legendary stone called Hamiathes's Gift and steal it.

The magus has plans for his King and his country. Gen has plans of his own.