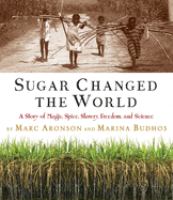 A Story of Magic, Spice, Slavery, Freedom, and Science

When this award-winning husband-and-wife team discovered that they each had sugar in their family history, they were inspired to trace the globe-spanning story of the sweet substance and to seek out the voices of those who led bitter sugar lives. The trail ran like a bright band from religious ceremonies in India to Europe's Middle Ages, then on to Columbus, who brought the first cane cuttings to the Americas. Sugar was the substance that drove the bloody slave trade and caused the lossof countless lives but it also planted the seeds of revolution that led to freedom in the American colonies, Haiti, and France. With songs, oral histories, maps, and over 80 archival illustrations, here is the story of how one product allows us to see the grand currents of world history in new ways. Time line, source notes, bibliography, index.

This book traces the history of the sugar cane from it's wild origins in New Guinea through it's spread through India and then the Muslim world. The Muslims were the first ones to create a sugar plantation, where vast stretches of land were all about one crop. However, although they are the architects of the system, the problems of labor and the need for lumber aren't solved until the Europeans take over dominance of the trade.

In the space of two centuries, sugar goes from being a luxury commodity that kings are willing to pay small ransoms for to a relatively common household item. In a story familiar to those who worry about the cost of strawberries shipped across the country versus those grown a few towns away, the authors note that it is now cheaper to buy sugar from overseas than it is to buy honey produced down the road. And it still is.

The engine that drove sugar production was slavery (later indentured servitude). Although slavery in all forms can be brutal, it was particularly so for those involved in the sugar trade, and that was the majority of slaves. While North America purchases 500,000 or so slaves who grew into a population of 4 million by emancipation, the sugar producing islands took more than 2 million slaves over their history, but only a third of those were alive when they were emancipated. Again, sugar was brutal work.

Ironically, although sugar was what encouraged the enslavement of millions, it was also the weapon people used to later stop slavery in England through a boycott. (Similar strategies, the book notes, were also used in the movement led by Gandhi to end English rule in India by boycotting English-made products.)

It's a messy history- most modern plantations aren't filled with slaves, but most of the workers are still underpaid. The pictures taken in 2005 of young children in the Dominican Republic carrying cane on their backs is heart-breaking. This will leave it's readers thinking about the issues of food production past and present in a way that encourages them to ask questions rather than make too many conclusions. It will also encourage them, I think, to think about food justice in a way that, sadly, vegetable and fruit farming do not. Is there a child in this country that doesn't like sweet things?

This is not perfect: the tone is more strident than we usually see in history or social studies' texts, and I take issue with their characterization of pre-1000 AD Europe as a backwater; certainly more so than the Muslim world or other parts of Asia, but even at their lowest point Europe maintained trade ties with the rest of the world. Still, this is filled with information in a context that middle-school-aged children and olderwill be able to relate to and learn from.

While interesting, I thought this book was perhaps trying too hard to tie everything together in a nice sugary bow. Also, trying to cover the globe-spanning history of sugar from 500 BC to the present may be too ambitious a task for a hundred-page book aimed at middle school students. As a result of cramming so much into such a small space, the book becomes more of a loosely connected bag of facts than a single historical narrative. And, despite their hammering the point home in many ways, I remain unconvinced that sugar is the web that ties history together. I know this is a kid's book, but that just seems like a gross oversimplification of history. Still, interesting and a thought-provoking read.

This was the one book on the YALSA Nonfiction Award list that fell flat for me. The information was interesting enough, and I did learn things. But the tone was inconsistent. I could really tell that it was written by two people. Their voices didn’t always blend well. It often felt a bit like reading a textbook or sitting in a lecture. I felt like I was being taught, not told a story.

Fascinating! I learned a ton from this very readable book. Scary what people do for money. Perfect resource for a report, but not sure many would pick it up for fun reading.

This ambitious book covers the history of sugar and how it influenced and was influenced by human demographics, slavery, societal organization and revolution.

The history of sugar growing is steeped in tyranny, colonialism, slavery, and science. This illustrated book is a great resource telling the story of why all those slaves were brought from Africa and India to US, Haiti, and many other places.

FaithR thinks this title is suitable for 11 years and over