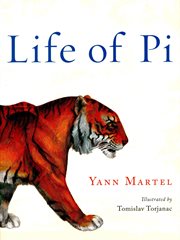 THE LIFE OF PI is one of two of the most unusual books I've ever come across. The other was McCrae's KATZENJAMMER. (A third was ME TALK PRETTY ONE DAY by Sedaris, though that book is quite funny as well). LIFE OF PI is told by the central character, Pi, whose real name Piscene (pool) has been distorted in childhood to Pissing, assumes a name that measures the diameter of a circle, the symbol of omniscience, omnipresence, and omnipotence. Pi tells two stories of being lost at sea--one story of a miraculous survival for 277 days of a boy on a boat with a Bengal tiger and another story of cannibalism and murder on that same boat whose occupants are Pi, a cook, Pi's mother, and a Taiwanese sailor. Pi says, "So tell me . . .which is the better story? And so it goes with God." Life of Pi concludes with the investigators for the shipwreck's cause choosing the first story in which the caged animals somehow all escaped from their cages as the ship Tsimtsum sank suddenly to the bottom of the Pacific as the more believable, but is the reader to do so? Before choosing to believe the first story, Mr. Chiba, one of the investigators, makes associations between the hyena in the first story and the cook in the second; he sees the zebra in the first as the Taiwanese sailor in the second. The orangutan in the first was Pi's mother in the second, and the tiger Richard Parker from the first is Pi in the second. Then Mr. Chiba asks, "What about the island? Who are the meerkats? What about the teeth? I don't know. I am not inside this boy's head." Must also recommend KATZENJAMMER by McCrae and the novel BARK OF THE DOGWOOD for two other great reads.